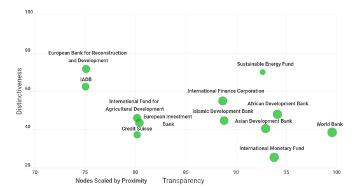 As this visual demonstrates, the top Finance Sector actors are transparent in their work, although they often speak in the same language. The World Bank clearly is the most transparent actor in the conversation, as a result of its high level of publishing content and its executives appearing in public forums. By slightly broadening the number of Finance Sector actors analyzed in this Figure, we see our first – and only – fully private financial institution in the conversation – Credit Suisse, a Switzerland-based investment bank. As a result, it is clear that much of the work in the Finance Sector to create sustainable markets is not being led by traditional investment banks (such as JPMorgan or Goldman Sachs) but rather by institutions that are supported by public funds and also can play a role in the policy process – such as the World Bank and the International Monetary Fund.